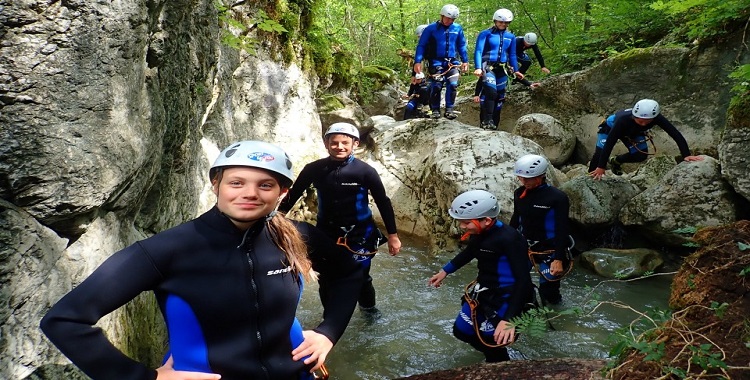 Budget European travel and adventure sports do not make a happy marriage. So what does one do when one feels the ‘need for speed’, a bit of ‘daring do’ whilst on the road in Europe? Well, one goes to Slovenia.

Commonly known for… absolutely nothing, it turns out that Slovenia is a total gem. I could write a whole article on its adorable capital, Ljubljana, but the real attraction for outdoor enthusiasts lies to the north-west in the Julian Alps. Sandwiched between Italy and Austria lies the Triglav National Park which is named after the 2,864m behemoth, Triglav mountain, and it’s three adjacent pinnacles (Triglav = three heads).

An hour from Llubjiana lies Bled, which is a good base for exploring the mountains because of its spectacular lakeside location and also because it’s less of a time commitment if the weather is fickle. Bled is an attraction in its own right and well worth a day or two riding or walking around the lake and hiking up to look-outs for postcard-worthy vistas. Another option is to stay closer to the mountains in Bohinj or Bovec which would be great if you have ample time.

Lake Bled was lovely but I had my eye on the prize….canyoning. I’d come to get into those mountains and get the blood flowing through my arteries which were rapidly clogging with beer and European baked goods.

Although I think most adventure sports can be enjoyed by everyone, canyoning is a little bit different, being most enjoyed by people of a certain genetic variety. Not sure if you have canyoning in your DNA?

Lake Bled is a gem within Slovenia

There are many companies in Bled willing to take your money, different prices and different regions. For no particular reason we chose LifeTrek. As it turned out, that was a good choice. Our guide, Jose, told us that he was the only one in the country with an internationally recognised canyoning guide licence(!). Normally I’d be sceptical of such a claim but he didn’t sell us the package, we were already on the trip when he divulged this disconcerting piece of information. So here’s a word of warning. Slovenia does not have the strict compliance practices that you find in other countries. LifeTrek were fantastic and I would highly recommend them but whoever you choose please check their guides’ credentials.

Coming from Australia, one never gets over the intense beauty of driving through mountain passes. Every time I travel in one of these terrains my jaw drops and stays that way as I take in the sheer scale of the landscape. I’ve learnt to control the flow of saliva but could never stem that tide of wonder. The Julian Alps were no exception and I remained wide-eyed as we reached our destination, Predelicska Gorge.

Absailing through waterfalls was insane and amazing

There was a really tough trek down and up a steep hill to get to and from the start and end points of the canyon. This wasn’t a problem though. Nothing motivates you for exercise more than the unpleasant reality check that is a skin-tight wetsuit.

After gearing up, training and final ‘nervous pees’, we were on our merry way. What followed was several hours of utter joy. There is nothing more fun than hurling yourself with carefree abandon off giant boulders into little pools of freezing cold water. Or navigating your wet-suit clad body down one of mother-nature’s slippery slides, looking like a little penguin from one of those nature documentaries. Just tuck your elbows in and go for your life. All the while Jose was incredibly kind and patient – we moved as a group and never rushed anyone. Hell, I temporarily freaked out at one of the bigger jumps but I didn’t for one second feel pressured to do it. There is always the option to just abseil down.

The highlight came right at the end. Picture abseiling down a 40 metre sheer cliff face with torrents of water cascading down on your head, descending into an ancient river bed whilst the Slovenian mountains surround and dwarf you with their presence. It was a massive buzz and excuse the cheese but I don’t think I’ve ever been so close to nature in my life (and I had the bruises to prove it).

There were some things that I saved up for in my 7 month European trip and at 100 euro, this was one of them. Budget travel and adventure sports don’t always mix but you can make your hard-earned money go a little further and Slovenia is a great place to do it.

Previous 24 Hours in Amsterdam
Next The Other Side Of Koh Phangan, Thailand