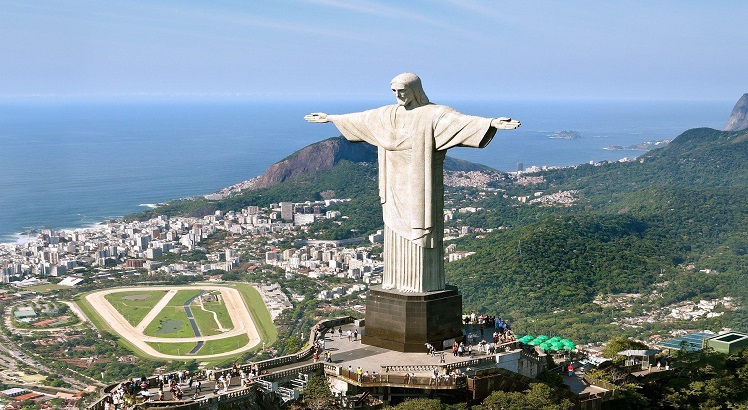 The statue of Christ the Redeemer is a symbol of Rio de Janeiro, and a trip to the top of the hill to visit it was a definite on our to-do list while in the city. We had the opportunity to go as part of an organised tour on the day of our arrival with the other members of the Intrepid trip we had been doing, but decided to leave it for later in our stay, which turned out to be a good decision. We did have to wait several days for the weather to clear up, unless all we wanted to see was the inside of a cloud, but the wait was worth it.

The street art made up for footpath quality

We were staying in the neighbourhood of Santa Theresa, a lovely area of town that’s famous for its steep streets and the trams that run up and down them. Sadly, at the moment the trams aren’t running as a result of some recent accidents, and the buses that have replaced them aren’t nearly as picturesque. We decided that since we were already halfway up the hill, walking to the statue would be a cost-effective, interesting and healthy option.

We set off at about eleven am, turning left up the hill. The statue was already visible high above the treetops, so the goal was in sight — even if it did seem very very far away.

The way was straightforward, we had been told to follow the tram tracks then the signs, which was exactly what we did. Footpath quality varied from bad to non-existent and when there was a pavement cars were usually parked on it, blocking the way and forcing us out into the road. No worries though, the urban jungle just presents its own variety of challenges – instead of worrying about snakes and other animals, you can keep your eye out for oncoming buses.

The street art along the route was amazing, as were the views out over Rio, which we could glimpse occasionally through breaks in the trees. Jesus, too, came in and out of view, ever-closer but still tantalisingly out of reach.

Rejoining the crowds at the top

The road steepened significantly after we turned off from the tram tracks, and the footpaths disappeared almost completely. We crossed and recrossed the windy road to avoid being run over by the many cars, taxis and minibuses that passed us at speed going in both directions, and took a break by the ruins of an old turnoff which, oddly, had a basket of eggs sitting in the middle of it. We had passed a turnoff to our left, to a lookout that promised excellent views of the Christ and Rio, but the road looked steep and we had no idea how long a walk it would be; we decided to leave it until later.

Not long after our break, we turned a corner and found ourselves in a parking lot; we’d arrived at the ticket office. Turns out the R$17.75 entrance fee (it’s more expensive on the weekends) includes a minivan ride up the last stretch of hill: glory! I took the last seat available, between the driver and a chatty tour leader/amateur photographer, and buckled up for the windy drive.

The van dropped us off at the top, where we swiped our tickets through the entrance turnstile and took an elevator then an escalator to the highest point, coming out behind the statue.

A few steps took us around to the other side, where tourists jostled for position, trying to take an iconic picture of themselves with as few other people in it as possible, some lying on the ground to get the correct angle. As for us, we headed to the barriers, from where we could see Rio de Janeiro stretching out in front of us: the Rio-Niteroi bridge, the port, the Sugar Loaf, Copacabana and Ipanema beaches, the lagoon, the favelas … it was all there. Luckily the weather was fantastic, clear blue skies and lowish temperatures, the complete opposite of the overcast days that had prevented us from heading up earlier.

After spending half an hour or so enjoying the views and looking up and up at the statue of Jesus, we had a drink at the snack bar then started our descent: the same as before but in reverse. On the way back down we took the detour to the lookout we’d seen signposted before, which turned out to also host the helicopter pad from where you can take a scenic helicopter ride around Rio. The views of the Christ on one side and of Rio from the other were as impressive as they had been up above, but with rather fewer tourists around. Then, it was back to the road for a leisurely walk back to Santa Theresa.

Sure, you can get to the statue of Christ the Redeemer by taxi, car, or organized tour, or see it by helicopter if you have the money to pay for it, but nothing beats going by foot.

Previous Why Your Mum is Wrong: Drinking ‘Mate’ in Argentina
Next Kayak with Dolphins in South Australia