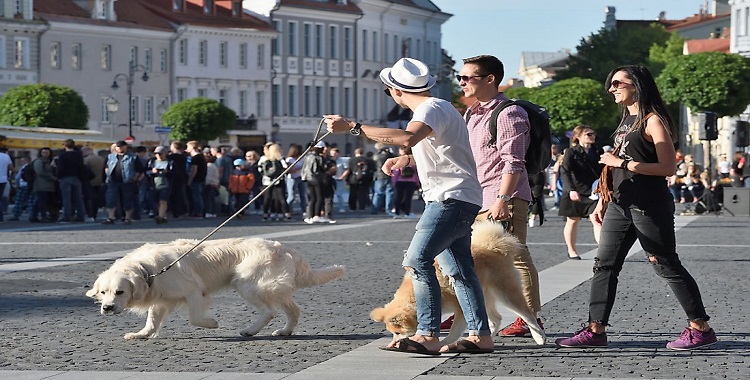 The capital of Lithuania is Vilnius. The first time I went to Lithuania, I got an over-night train from Poland, I needed to renew my Polish visa and it was a fast and cheap option to head to Vilnius to do it. I’ll never forget that visa; I was trying to find the embassy and ended up asking this elderly couple for directions. They were parked on the side of the road, cleaning out their car (vodka bottle noted, empty), and didn’t speak English but we managed to understand one another. He ushered me into the car and took me to the embassy himself in his old, beaten up eastern European car.

A stunning view looking back over Vilnius

Vilnius is a big city, population just over half a million and currently the European Capital of Culture 2009, along with Linz, Austria. Although medieval in origins Vilnius has developed a cosmopolitan, western European feel in parts, with diverse architecture including some of the most amazing gothic churches. That said, it has an ‘Old Town’ as its historical centre and its one of the largest in all of Europe. There are nearly 1,500 buildings in the old town, and built over several centuries thus, creating a blend of architectural styles. A breath-taking example of gothic architecture would have to be ‘St Annes Church’, so go and see it! You can go inside also, it’s truly awesome.

For a great view of Vilnius, take a walk up to the ‘Three Crosses’, a monument on Bleak Hill. There’s a well maintained path up, and though its not a torturous walk, the views are stunning. The original monument was designed by a Polish architect and sculptor in 1916. It was destroyed by the Soviets in 1950, and the one that stands there now was erected in 1989. At 1.8 metres high and painted white, the crosses can be seen from town, on the hill top.

Accommodation was easy to find, I got a bed in a great hostel and there’s a massive station not far from the town centre that has trains and buses running to and from various European destinations. I did note that an ‘information centre’ at the train ticketing depot didn’t have any English speakers in it – I ended up getting help from a girl of about 8 years old.

I stayed in a hostel close to town and headed off to do different things each day. I really wanted to see the ‘Hill Of Crosses’, which is 12km north of the city ‘Siauliai’, in northern Lithuania. ‘Siauliai’ is small, but I found the best hostel – a huge, wooden house, where I was given a big, airy room with double bed, and breakfast for around $4 per night. I got a bus from Siauliai to the Hill of Crosses – word of warning, the sites not as close to where the bus drops you as what they make out. It’s a long dusty road to walk to get there, but very worth it.

The incredible Hill of Crosses is simply memorable

No-one is sure why or how the Hill of Crosses started, but its generally considered the first crosses were placed there after the 1831 uprising. It’s estimated there are up to 50,000 crosses – and these are in all shapes and sizes, including statues, rosaries, effigies and crucifixes, left there by Catholic pilgrims. Apparently, during soviet rule, they were bulldozed and rebuilt again, three times. Amazing, and a World Heritage site to. Make the effort to get there.

The etiquette for getting onto a bus in Lithuania is – tickets are bought on the bus, from the driver. And there’s no such thing as a queue, its more a free for all with elbows and shoving to make yourself room. It took me a while to click as to how it worked, and don’t be fooled by the pensioners who look little and frail, they’re not, they’re just as determined to get a ticket as the next person.

Lithuania is a ‘must visit’ destination.  Its a slice of old world european culture and well off the beaten backpacker track.  Go and check it out! Now that its part of the European Union there are cheap flights going to Vilnius from western Europe, with Easy Jet and Ryan Air.