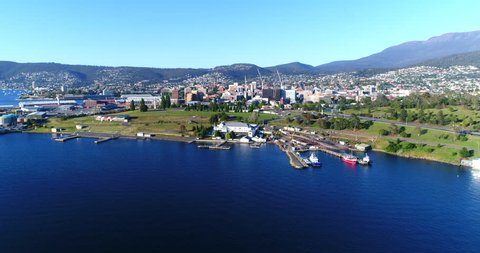 I’m living in Hobart currently – I’ve been here for three months, doing my pre-departure training for a summer of work in Antarctica at an Australian base.

It’s interesting, Tasmania doesn’t seem to be referred to much as a ‘must see’ by pending Australia visitors and / or travelers, it’s often by-passed, almost forgotten about – so what are people missing out on?

Tasmanian Devil Conservation Park is well worth the entry fee to save these guys!

First up, geographically, Hobart’s close to ‘the mainland’, but that’s where comparisons end. You can get a (cheap) ferry from Melbourne that takes a few hours and arrives in Devenport, or you can fly which takes just over an hour. I’ve even heard a rumor that Hobart airport may become an international one in the near future. The flip-side is, as locals have ‘fessed’ up; when they need an excuse to get out of something, get away with something or make a poor excuse for an average experience – ‘it’s Hobart, it’s different’.

Hmm, well I’m going to use ‘eclectic’ when I describe a Tasmanian local, ‘Wellington’ when I describe Hobart (colonial, wooden houses, the port, the hills..) and ‘England’ (the wet north) when I compare the weather – although, this has just happened to be the wettest winter here in 103 years.

So while I haven’t seen all of Tasmania, I’ve heard it’s green, has great outdoors ie hiking, climbing, skiing, has amazing foods – cheeses, yoghurts and mushrooms etc, and super wines and vineyards.

Hobart is a compact, organised city. One way streets abound, it’s clean and has all the usual city shops – and, there is a very cool knife shop here, the owner makes and sharpens knives, and will talk knives ‘till the cows come home!! I’ve found an awesome map shop too – with all things travel, covering all 4 corners of the globe and even things in outer space. I get the feeling Tasmanian’s love the outdoors – you won’t be stuck for choice here when it comes to finding an outdoor store. Coffee…look hard, the good ones have proved hard to find. And then there’s the Elizabeth Street mall, a magnet for ‘characters’ that has left me convinced I’ve ‘seen it all’ now. I haven’t seen much in the way of backpackers’ or hostels, but they’ll be out there somewhere.

Visit Port Arthur and step back in time

Salamanca is the downtown area near the wharves; nice bars, seafood restaurants and fresh fish markets, alongside moored yachts and launches, and on a Saturday, a whole street comes alive with the markets; traditional, busy and big – you can buy all sorts from organic vegetables, honey, crafts and reusable sanitary pads! Best to get there by about 1pm at the latest.

For a slice of history and less people head out to Port Arthur. A couple of hours from Hobart, Port Arthur is a step back in time and famous for two reasons – 1) the site where the first penal colonies were housed and 2) the starting point where, in April 1996, a local armed himself with 3 guns and killed 35 people on a rampage. 20 of them were eating lunch in a restaurant at Port Arthur. Immediately after, the restaurant was gutted – all that remains is the outside shell, although you can walk through this to a memorial outside the back.

And then there’s Port Arthur the penal colony. You pay at the door to enter the grounds, and it’s at least 2 hours walk around all the remains. There’s a museum as you enter, with various facts and artifacts and while it’s not ‘my thing’, it’s yet another well maintained slice of history – from the old day amazing to the modern macabre. Buses leave for Port Arthur daily from Salamanca waterfront.

A highlight on the way to Port Arthur is ‘Doo Town’. A small group of ‘eclectics’ have each put signs up outside their humble abodes that have ‘Doo’ in their names, i.e. ‘Just Doo It’, ‘Scooby Doo’, ‘Thistle Doo’ and ‘Doo [email protected]#k All’. Buses pass through so it was nice to get out of the car and get some pics, I think it’s a great example of ‘Aussie humor’!

On the way home from Port Arthur we stopped at a Tasmanian Devil Park. I thought entry fairly steep at $25 each, but then I realised they assist in preservation of this dying-out species, great! Happy to help. I’d never seen a ‘tassie devil’ before, they’re kinda cute in a feral cat vs dog kind of way. We were in time to see a feeding, what was on the menu? Tails, from which animal? Can’t recall, but the devils were into them! The thing posing the biggest threat to their survival is a type of face cancer that affects only the devils. It forms as a massive tumor, often times around the mouth – thus affecting breathing and eating. There are some pretty horrific photos of it on the internet – but at present, they’re dying out in their hundreds. So while there’s not much within the park, any money spent on the entry fee goes towards saving them and to that means, I’ll give it merit.

Twenty minutes drive from Hobart is Kingston, and while it’s another suburb, in another city, it’s also home of the Australian Antarctic Division. The division is open to visitors daily, has a large cafe, and provides an insight into what goes on in Antarctica now, and what has happened in the past. You can get kitted up in the clothing that someone going down there would have to wear, see remnants found from past explorers, maps, stuffed penguins, a seal and huskies and check out the library – the biggest Antarctic collection in the world!

At the wharf end of Salamanca in town, you can check out the Aurora Australis, the icebreaker that ferries Australian Antarctic expeditioners south throughout the summer months. The smaller one moored in front of it belongs to the French. While you won’t get aboard for a look, you’ll get great photos from ground level.

For seafood lovers, Hobart has plenty to offer, especially Salamanca way with various seafood restaurants, and for wine drinkers, go no further than ‘Grape’,also in Salamanca. I wouldn’t usually be one to push a bar, but having studied wine myself, this bar is a dream! Not only serving wine, they have a cellar like ‘shop’ in the bar – like the wine you try? Buy a bottle! Oh, and the eggs benedict Grape do make for a nice breakfast to.

While I haven’t strayed far from Hobart, Tasmania is compact and the true ‘gem of the south’, according to Tasmanians. Launceston is only a couple of hours from Hobart, along with ski fields and the great outdoors. And for sea lovers, coastal roads offer beautiful scenery. So, considering you can get here economically and quickly from the mainland, come over, take some time and check it out!