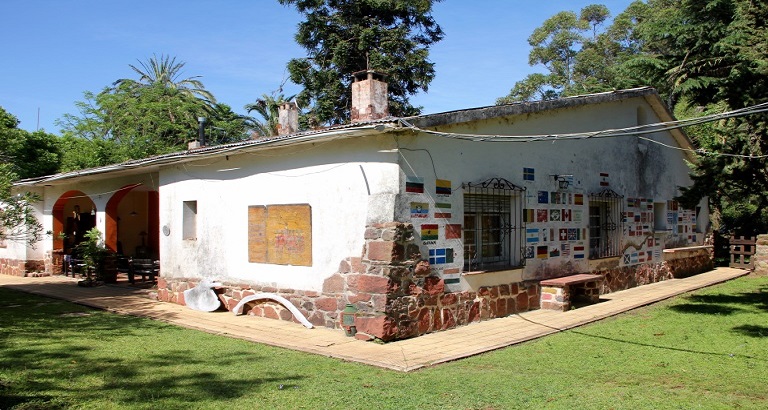 The fire was roaring as we stepped in the door, a little shaken from the hour-long minivan ride along a potholed dirt track, which had followed another five hours on a bus from Montevideo, Uruguay. We were certainly in the middle of nowhere, but the next few days were going to show us just how worth it the journey had been.

Panagea estancia is a cattle and sheep ranch located in northern Uruguay, run by local Juan and his Swiss wife Susanna. It’s their home and their livelihood, but they open their doors to tourists as well, letting us have a taste of what estancia life is like – home-cooked food, riding horses gaucho-style, electricity only a few hours a night, and not a hope of cellphone coverage or wifi.

The farmstay side of operations is definitely secondary to the main business of running the ranch, which goes on regardless of whether or not there are visitors to see it, which there frequently are not – this isn’t one of your one-in-one-out kind of tourist destinations.  It’s Juan and Susanna’s real life, where they’re raising their two daughters – who are both very much part of the experience as well.

The estancia has several rooms with between two and four beds in each, capacity for about twenty visitors in total. You’re expected to share with other visitors depending on who is there at the time. Luckily, when we were there it wasn’t full – there were only 12 people apart from the family, and Craig and I got a double room to ourselves.

On the first night, Juan explained how things worked while Susanna prepared dinner over a wood fire. We ate inside or outside according to preference, most of us with a beer or glass of wine in hand, which are available for sale at a reasonable price. We made the most of the three hours of generated electricity to charge our various devices and read or watch a movie, then turned in pretty early, using candles to light our way.

The next day started with a tutorial by Juan, teaching us how to saddle a horse gaucho-style, then how to mount and ride for those of us who didn’t have much experience. Those who did had a chance to try a new style of riding, since gauchos hold the reins one-handed; horses are trained this way and won’t respond reliably to commands given with two hands.

Our excursion on the first morning was a simple walk around the estancia, to accustom ourselves to riding. One girl in the group had never ridden before and was given a “slow horse” – the horse in question took this to heart and lagged behind a little. Some of the others weren’t as languid and needed little encouragement to break into a trot on the long stretches. On the whole though, it was a nice, slow walk; most of us chatting as we went.

The middle of nowhere

After lunch, cooked outside over an open fire, we were back on the horses again, but this time to work. The new lambs needed to be drenched, and for this to happen a whole flock of sheep needed to be herded into a corral. Volunteers weren’t lacking to catch or hold the sheep while another volunteer squirted a liquid into their mouths, but I wouldn’t have like to have done the other jobs Juan did at the same time: tail docking and castrating. The sheep baaed their way to freedom and we headed out on another task; this time to move a large herd of cattle from one field to another. The riders split into two groups to collect all the cattle from the huge paddock, which were then led through a gate to the adjoining one. They complained a lot less than the sheep had, but showed an overwhelming tendency to have sex on the hoof. The horses sped up considerably on the way back to the house; they knew their day’s work was over and they were ready to relax. As were we; we settled in with a glass of wine and tucked into another of Susanna’s delicious meals before watching the Motorcycle Diaries on DVD and enjoying the fire.

The next day was more of the same – a work excursion in the morning and another in the afternoon, with a tasty lunch to break things up. Those who didn’t ride stayed behind and read in the hammocks, played cards or just chatted. We didn’t put a movie on on that last night, nor did we make a fire. We were all happy and warm enough just sitting around outside with a glass in hand and someone to talk to. Juan came round to offer us a glass of a locally made honey liqueur, and we turned in late.

The next morning we waved goodbye to Susanna and the kids and Juan drove us to the bus station. We’d spent less than the maximum five days on the estancia, but we were already planning our return trip.