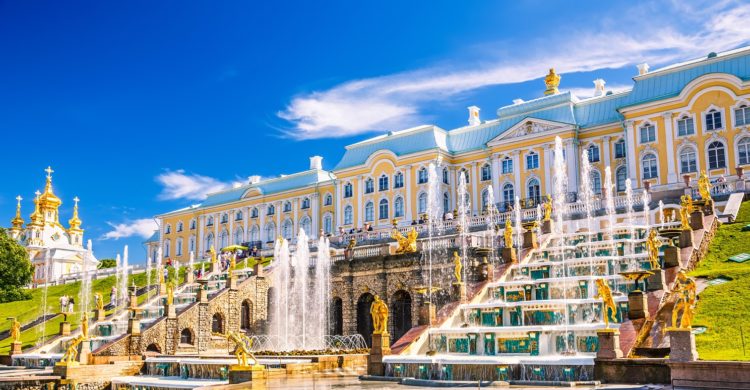 ‘Peterhof’ was included as part of the trip I was on, and for Catherine’s Palace, the tour company assisted in getting me to and from the palace. Both are definitely worthwhile, although Peterhof is bigger, brasher and more golden – and has more to see within its surrounds than Catherine’s Palace.

Peterhof, 29km from St Petersburg, is in the town of Petrodvorets – the ‘Germanised’ version of the name given to the town (and palace) during WW2. While the palace has gone back to its rightful Russian name, the town still goes by Petrodvorets.

Interestingly, Versailles was the inspiration behind Peterhof; more of Peter the Greats grand ideas, this time for an imperial palace within the suburbs of St Petersburg. It was Empress Elizabeth (Peter’s granddaughter) who was responsible for the expansion of the Palace, its park and its fountains – you can easily spend a good few hours here wandering through the grounds taking it all in.

Catherine the Great moved the imperial court from Peterhof to ‘Catherine’s Palace’, but during Nicholas the Firsts reign, Peterhof became, yet again, the Imperial Residence.

The Palace was one of the first Russian estates to be restored after WW2, which saw it completely ravaged by the Germans.

I remember the day we went, we got to the site and were quite discouraged, believing that what we saw outside was a reflection inside – how wrong could we have been! Even our guides didn’t indicate otherwise. So, some of the group stayed outside and sat in a park, and boy am I stoked I didn’t join them! Take the time to get out to Peterhof to see it – but be warned, it’s an incredibly busy place! There are lots of Russian visitors as well as the odd non-Russian visitor. You can go inside the Palace, but unfortunately, it wasn’t open the day I was there so I had to settle for the outside – which was still spectacular.

The Main Cascade of Peterhof Palace

Within the gardens are immaculately tended flowerbeds, formal gardens, a channel from the main palace that heads directly out to join the Gulf of Finland, the Garden of Venus, the Garden of Bacchus, Peters orchard (cherry and apple trees) and several statues.. The parkland represents almost two centuries of European aristocratic fashion, to the highest of standards. I found a cafe within the park confines and wrote postcards over a ‘kofe’ – fabulous!

Without a doubt, it’s the fountains that make this park one of Russia’s most popular tourist attractions. The ‘Grand Cascade’ is what I first saw when I entered the park, and it literally took my breath away! The channel to the Gulf of Finland (the ‘Marine Canal’) is set into the bottom of the Grand Cascade – comprising of 64 fountains, over 200 bronze statues, bas-reliefs and other decorations. The centre-piece is Rastrelli’s statue of Samson wrestling with the jaws of a lion. I don’t know so much about ‘Samson’, but it’s such an amazing piece of work! You will get amazing pictures of this if you take your time – there’s a fountain within the statue..

There is an official opening of the fountains at the end of May – an all day festival complete with music, fireworks etc and each fountain section within the park is turned on, one by one – can’t imagine that being a small affair.

The facade of Catherine Palace

We didn’t spend long in the town (Petrodvorets) but there is an enormous, beautiful church not far from Peterhof – the ‘St Peter and Paul Cathedral’ that’s worth getting photos of.

Catherine Palace is 25km from St Petersburg, in the town of ‘Pushkin’ (or ‘Tsarskoye Selo) and was the summer residence of Russian tsars.

The original residence was built in 1717, when Catherine 1 wanted a summer palace. In 1733 it was expanded by Empress Anna, but, Empress Elizabeth had it demolished in the mid 1700s, and redesigned in Rococo style by Rastrelli. It took four years to build and there was over 100kgs of gold on its facade and in the roof statues.

There are extensive gardens also – with various buildings, bridges, statues (including the famous ‘Girl with a Broken Jug) and a lake.

I didn’t go inside – the queue of visitors was scarily long (no surprises there!) but yet again, it was grand just to wander through the gardens and take things in that way. The Catherine Palace is home to the ‘Amber Room’ – world famous, and even referred to as the ‘Eighth Wonder of the World’. It took 8 years to build, and has over 6 tons of amber – well, that’s the original one, which was lost at the end of WW2, so what you’ll see now is a carefully, reconstructed copy. This replica was finished in 2003, the year I was in Russia, and dedicated by Vladimir Putin and German Chancellor Gerhard Schroder at the 300-year anniversary of St Petersburg. I didn’t see any official goings-on, but there were banners and posters throughout St Pete’s for the 300th birthday. Yet again, get there early to be near the front of the queue for seeing inside the palace!

The Marine Canal which leads to the Gulf of Findland

(Vladimir Putin did visit the Winter Palace one day when I was there actually…. I was on my way back to the Winter Palace for another look inside.. While it was gutting that it was closed, the young, Russian soldiers lined up (about on guy every 2 metres) for the whole exterior as a salute – it was pretty ‘nice‘

I didn’t spend much time in Pushkin when Id finished at the palace because my transport picked up from the palace gates and it was waiting for me when I’d finished my look around.

I can barely imagine what the exterior looked like in the days when it was real gold. Both days that I visited these palaces the sky was grey, grey, grey! Makes such a difference to your photos – if only I could have picked a blue sky!