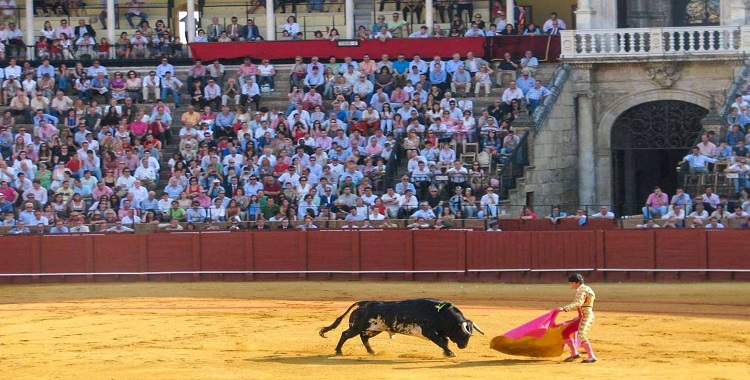 The Ritual of The Bullfight, Seville in Andalucía, Spain

Passion and blood in the Plaza de Toros

You could hear the passion in the voices of the two men arguing in the corner of the small bar. “That matador is rubbish” the older one said, gesturing at the poster on the wall. “Well, Juan Carlos isn’t so great either” said the other, “I don’t know why you insist on his prowess.” The debate went on, each attesting to the bravery of one matador or another.

The scene was replayed all around as, like the supporters of a football team they discussed the merits of the players in the game with passion, toasting with drinks and raucously cursing in high spirits.

We had come to Seville in Andalucía at Feria, the start of the season, to watch a bullfight at one of the most important bullrings in Spain, The Plaza de Toros de la Maestranza. This historical venue is an impressive sight and with a capacity of seating around 14,000 spectators, it’s a prime venue for the sport and is packed to capacity most of the season.

For travellers who do not want to see a bullfight, but still want to understand the history and pageantry that surrounds it, the arena has tours approximately every 30 minutes every day and can give you a glimpse into the history of bullfighting in Spain and the grandeur of the Maestranza.

If you want to see a traditional bullfight then this is certainly one of the best places in Spain to do so. A seat will cost around 20 Euros and should be bought well in advance from the taquilla (box office at the plaza de toros) if you want to avoid sitting in the sun. Tickets are sold as either sol, sol y sombre or sombre i.e. sun, sun and shade or shade – with prices getting more progressively more expensive the cooler the seats.

Having purchased our tickets and taken a few cold beers at a nearby bar it was soon time to join the crowds on their way to the bullring. The resemblance to a soccer crowd stops at the lack of chanting but the excitement in the air was palpable. Television cameras were stationed at the entrance to capture the spectators, food stalls were doing a roaring trade and the beers were in full flow at the bars.

We passed through the turnstiles and followed the signs to our designated seats. The regular seating is on stone benches and the practice is to bring your own cushion or rent one at the stadium for a euro; we happily parted with the cash. In past times when I have been at a bullfight with a particularly poor Matador these cushions have been thrown into the ring as a mark of displeasure at the ineptitude of the kill.

We had seats in the sun and shade and sat there steaming in the heat of a Seville spring afternoon; drinking beers and watching the rest of the crowd take their seats. After a short while the band played an anthem for the dignitaries before launching with gusto into the famous Pasa Doble, España Cañí, marking the entrance of the matadors and the rest of the players in the day’s drama. Hearing that famous tune coupled with the rousing applause of the audience as they stood in salute to the occasion brought back to me the drama of Hemmingway’s Death in the Afternoon and set the stage for the events to come.

The Matadors and their teams lined up for pictures, the Picadors on their horses paraded around the ring and the bulls took turns for a photo call…..just kidding.

My travel partner had never been to a bullfight and was very nervous about the event, I could see however that she was getting into the spirit of it all and seemed to be enjoying the moment.

The crowd applauded the entrance of the first matador, usually the most junior but today we had a first class line up so there was little difference, then a hush where the noise of the stadium diminishes so much that you can hear the click of the lock as the wooden gates swing open and the bull rushes manically into the arena.

The matador holds his ground as the bull, disoriented, glances around before making a tentative charge at his adversary passing inches away from the kneeling fighter as he tosses his cape. A gasp from the crowd, applauses ring olé around the bullring as the matador takes pass after pass from the enraged bull.

From another entrance the Picador arrives on his horse carrying a long lance. The horse is protected on one side only and the Picador must keep that side at all times directed towards the bull lest his horse be fatally gored. His task is to taunt the bull to attack the horse and leave the upper torso exposed in order to place the tip of the lance into a weak spot and bring the bulls head lower. The struggle is tiring for both the horse and the bull and once the bull has had enough the Picador is retired.

For the bull his troubles have just begun; now come the Banderilleros, men on foot with short decorated sharp poles, banderillas, aimed at the same spot on the bull as before with the intention wear him down for the matador. Dodging and weaving they make diagonal passes at the bull, reaching over the horns to place the poles in the animals back, at times passing perilously close to being caught and tossed like rag dolls by the full force of the powerful beast.

Finally the dénouement; the matador strides into the ring and proceeds to bring the bull to heel passing and taunting it with his muleta (a crimson cape), the animal is mogadored and eventually is still, allowing the matador to turn his back and walk calmly away. At this point the bull is finished, the matador changes his weapon to the espada and prepares for the kill, moving into the bull with its head down and attempting one clean thrust to the back of the head…..and the bull falls.

At this point my friend burst into tears and looked away, I could understand her feelings. The bull was doomed on his way in and the gradual wearing down was completely one sided, the finality of the kill striking. She recovered her composure as the bull was dragged ignominiously out of the ring by a horse and cart, the scene tawdry compared to the pomp and circumstance of the commencement.

Whether you agree with bullfighting or not it is a part of Spanish culture that exists and is historically important along with many other rituals around the world of which travellers are in awe or disgust; however it is in the experience that gives us measure to hold our opinions.

Previous 8 Great Gadgets For The Modern Traveller
Next Bolivia’s Salt Plains: A Guide To A Natural Wonder