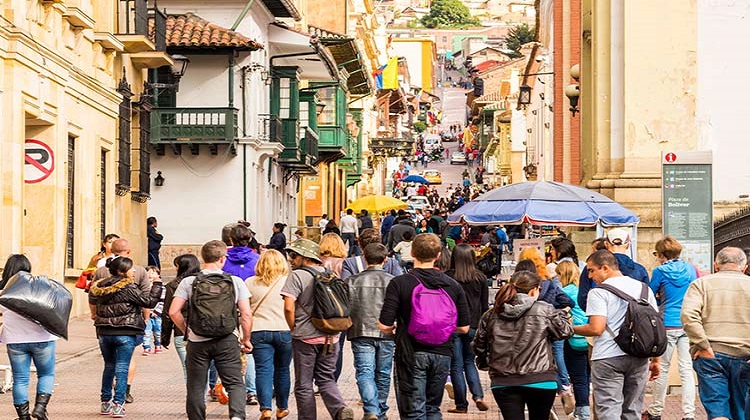 Bogota, the place could scar you forever!

When you first get to a new country, town or city you often get a feeling inside, be it instinct or not, but the feeling usually gives you a vague idea of your surroundings, good or bad. The feelings are then rated in a degree of dodgyness; I call this the dodgy scale. It has served me well in the past, and on arriving in Colombia’s capital of Bogota, the needle was beginning to hit the red line!

It was a long bus trip to Bogota from the satellite town of Pasto, and a quick taxi ride to a hostel in the Candelaria district. I arrived at 4am and the night manager of my chosen hostel was reluctant to help with anything except to doll out a little free advice: there were no longer vacancies and that 4am was not a good time of the night to be walking around looking for accommodation! Gee, thanks.

The main cathedral in Bogota, Colombia

Eventually I found a last minute hotel which seemed to have a dodgy hourly rate; the name of the hotel was “Hotel Beirut” and deservedly so as it resembled a war zone – it even came with screams at no extra cost, presumably screams of passion, but who could tell?

The next day involved moving to a location that didn’t charge by the hour. Eventually I found a place where the residents were a lot more pleasant and willing to go for a drink without having to pay for their company. So after a short stint of sightseeing I and two girls I met in the hostel went for a drink or three. A few different bars and a spot of dinner soon saw us heading back to the hostel.

The Hostel was in sight, only 50 meters to go when a beggar approached me for money. I have to admit a soft spot for the less fortunate, and boasting the ability to consume a few beers and still manage a conversation about relatively sain topics, I fished for the beggar’s life story. The girls kept walking unaware of my brief encounter when suddenly another street veteran appeared screaming at me to give her money. This effectively distracted me long enough for another two smartly dressed chaps to appear from nowhere, quickly pulling knives and demanding money. By this stage I was surrounded by shiny sharp objects and thanks to a few beers and utter disbelief at my current situation I let out a nervous chuckle, taking the muggers a little off guard.

Often colourful, Bogota has many faces

By this time the girls had become aware of my situation….not a good one! Stunned, their jaws dropped and blood began to drain from their faces. I realized that the girls were also in a vulnerable situation, so without truly thinking the whole thing through I called out for the girls to run, but as they were Aussie girls, instead of running for the hills the girls screamed like banshees for the attention of someone to help! They were more than likely attracting the attention of more muggers but the thought was there! Just then the muggers lost their cool and through pure frustration stabbed me in the chest. Thinking they got the better of me the muggers ran off leaving the girls and I in the street, fortunately with nothing more than a small scratch and a feeling of being very lucky – but in reality I give thanks to the very cold weather, therefore a load of padded clothing and a good solid sternum!

No major harm done, good story and as you would think, a lesson learnt. Unfortunately not, as the next day started very much the same with a bit of sightseeing, then a trip to the pub to visit some friends, when one thing led to another and we all found ourselves in another dodgy bar. We were a little out of place, sticking out much like Mr. T. at a cabin crew convention.

The girls left to go back to the hostel with me in tow, but again the I stopped to talk to some local blokes I had met in the bar earlier, when all the sudden a fellow wielding a knife appeared demanding money from me yet again! I couldn’t believe my misfortune; mugged twice in as many nights, held up at knife point. A little shocked and annoyed if anything, I foolishly grabbed the mugger’s knife hand, attempting to relieve the bugger of his knife when suddenly the mugger pulled his hand and knife back from my grip, slicing my finger right down to the bone!

With the amount of adrenaline racing through my body combined with a heart rate that could match that of George Bush’s doing a 4th grade maths quiz, blood began to squirt out of my finger in the general direction of the mugger, forcing him to flee empty handed. I then ran to the hostel where the girls managed to bandage me up and feed me some cheep red wine to ease the pain, until medical assistance could be sought the following day.

You might very well think you could avoid situations such as these, by not venturing out into some of the dodgier places of Colombia, looking for a good time, but after these experiences we talked to many people that had also been mugged in not so similar situations. These mostly occurred during daylight hours, on the bus, in the main square and many other places you would never have thought possible. You could always show a little more caution than that of my reckless self, but I think it’s a case of being in the wrong place at the wrong time. Saying that, I met people who never once came across anything remotely dangerous in the crazy town of Bogota.

My advice would be to take a limited amount of money out with you and just hand it over if a situation arises. It’s a better option to risking your life, with possibly the best thing you can do is to take a little more care than usual, listen to your inner dodgy indicator and not let a little thing like losing some money get in the way of you having a great time, whilst experiencing everything the world has to offer! Be it good or bad!!!