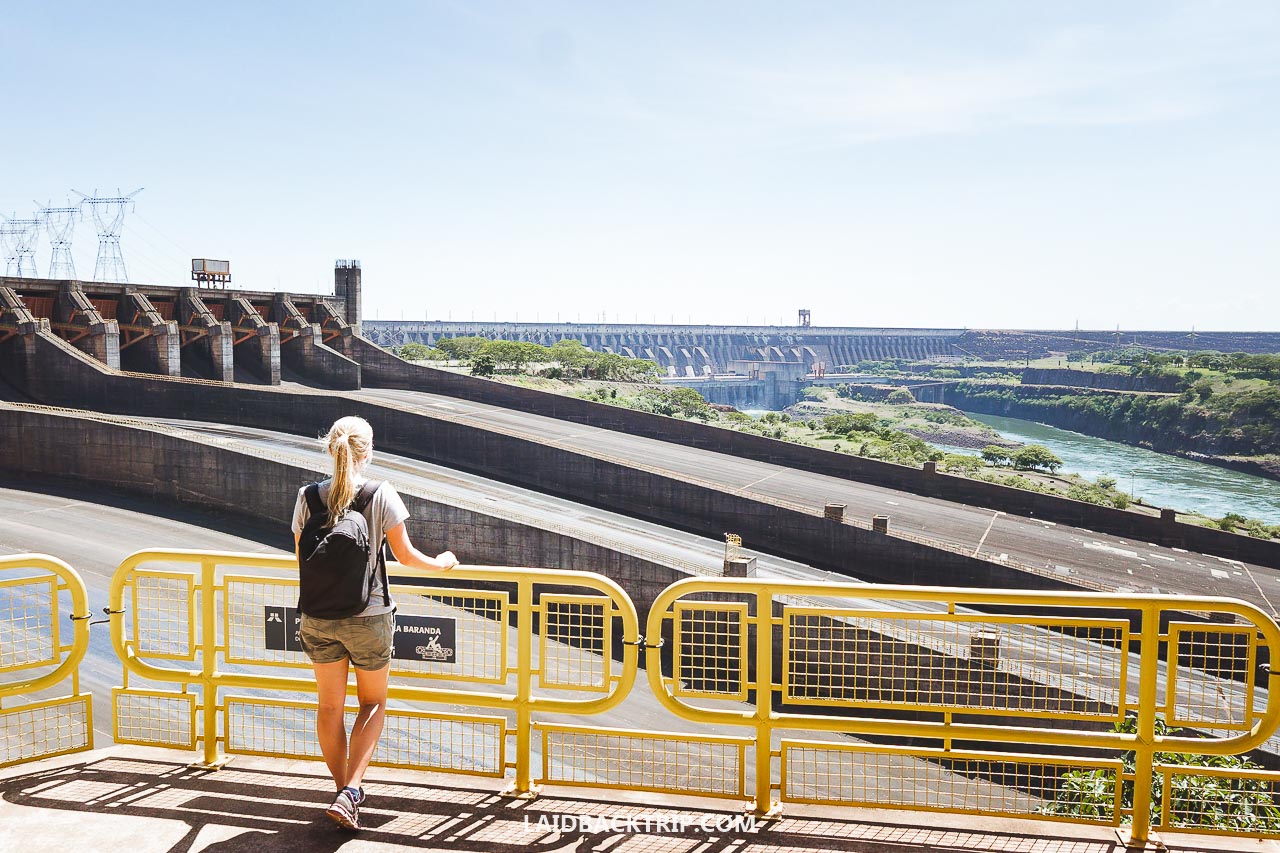 Visiting the Itaipu Dam in Paraguay

The Itaipu dam is one of the seven wonders of the modern world, the world’s largest hydroelectric power plant. It spans the river Paraná between Paraguay and Brazil, near the triple border of Argentina, Brazil and Paraguay.  You can visit from either side; we chose the Paraguayan one – mostly because we hadn’t had time while we were in Brazil.

After crossing the Friendship bridge from Brazil’s Foz do Iguaçu into Ciudad del Este, Paraguay, we stopped to ask for advice at the tourist office located in the customs building. A friendly clerk helped us find accommodation and plan out our week in Paraguay, as well as giving us information about how to get to the dam.

After settling into our hotel, withdrawing some cash from an ATM (which was more trouble than it should have been) and having lunch, we hopped on a bus heading towards Hernandarias. The conductor waved us on with a terse “si, si,” in response to me asking if the bus was going to the dam. I wasn’t sure if he had understood me, and was even less convinced when the bus proceeded to drive around the block and set off in the wrong direction.

Soon though, we were hurtling along a highway that our map thought was the right one, and we turned right at a roundabout, just like we should: what a relief. Our map showed a fork up ahead, the left fork heading to Hernandarias, the right to Itaipu. As we approached the fork, I willed the bus to go right, but no… It turned left, and pulled over to let people off. The conductor leaned over to us. “Aca,” (here) he said. Ah, so he had understood. We hopped off the bus and prepared ourselves for a long walk. But no, the visitor centre was only a hundred metres or so away, across a busy highway certainly, but not far.

We found the reception and asked if we could see the dam. There was some vacillation but the clerk eventually decided that yes, we could. She took our driver’s licenses as identification, made a note of our details, then called over another employee to show us the way to a waiting coach.

The coach was already half-full of people, none looking particularly enthusiastic. A few minutes later the driver got on, followed by a guide who spent some time fiddling with a microphone before giving it up as a bad job. Maybe it was supposed to be a guided tour; we rode in silence.

Ten minutes or so along the road, the bus stopped and we all got out to admire the panoramic view from a specially-constructed lookout, which as well as the view also boasted information boards. “The Itaipu Dam contains enough steel to build 380 Eiffel Towers”, is a fact that springs to mind. The view was impressive, and the river stretching off into the distance looked clean and beautiful.

Supplying electricity to Brazil and Paraguay

Soon, we had to hop back on the bus for the rest of the (silent) tour. We saw the dam lake as well as driving over the dam itself, getting close to the dam wall and a lot of the machinery. I had no idea what each part did, but it was definitely magnificent. The forest of electricity towers were connected to the dam by thick cables, sending electricity off to Brazil and Paraguay.

Back in reception, we looked for a brochure to take away with us and found one with the tour times on it. There were only four per day, with the last starting at 3:30 – preceded by a video at 3pm Huh. We’d arrived at about 3:20 and had been let on to the tour, but had missed the video. We were just about to leave when I thought I’d just ask if the information on the brochure was correct. It was, and upon understanding why I was asking, the guy behind the desk took us upstairs to play the 20-minute video just for us.

After watching the video (which was in Spanish) I understood a lot more about what I’d seen. The history, the construction process and the current workings of the dam were all explained well, using lots of statistics, graphics and emotive music. Our friend the desk-guy reappeared at the end to switch on the lights and usher us downstairs.

Back across the road, we waited for a bus to take us back to Ciudad del Este, then walked from the bus terminal back to our hotel in the dusk. It had been a great afternoon out, though it might have been good to know the tour times before we had headed out there!

Previous Getting into Paraguay: an Adventure in Bureaucracy
Next Why Your Mum is Wrong: Drinking ‘Mate’ in Argentina