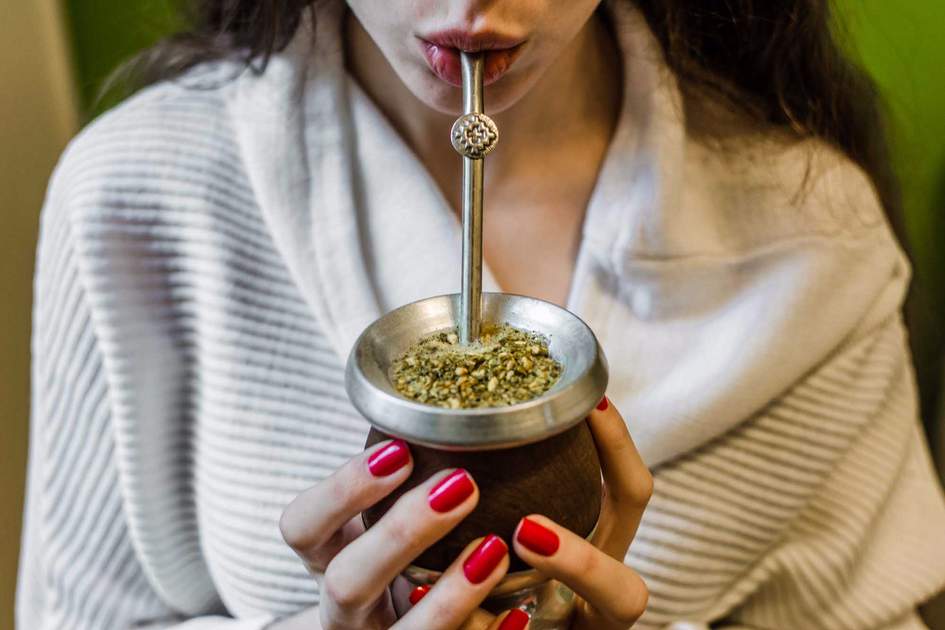 Why Your Mum is Wrong: Drinking ‘Mate’ in Argentina

Your mum brought you up to have good manners, I’m sure, and expects you to do her proud while you’re travelling: clean up after yourself, eat with your mouth closed, say please and thank you. And she’s right, of course. But you’re going to have to forget some of the things your mum taught you if you’re going to drink mate in Argentina.

Drinking mate is an important part of Argentinian culture. It’s both a hot drink and a social tradition, a ritual and a medium for conversation. I had seen people drinking mate before, both in South America and back home in New Zealand, and had even tried it for myself. It wasn’t until I attended a “how to make mate” class at Expanish, our Spanish language school in Buenos Aires, that I really felt like I understood the custom.

Mate is prepared in a small cup that’s also called a mate, which could be made of metal, wood, leather, or gourd shell among other materials. The principal ingredient is yerba mate, a dried tea-like herb. Unlike tea though, you almost fill the cup with the herb, then add hot (but not boiling) water until the cup is full – and because you’ve already put in so much yerba that’s quite a small quantity. Then, you drink the resulting liquid through a metal straw called a bombilla.

Usually one person is responsible for preparing the mate, and has control of the yerba, the mate cup, and the thermos flask of hot water. This person takes the first drink, which is often very bitter, then refills the mate with hot water from the thermos before passing it to someone else. This second person drinks all the liquid in the mate and hands it back to the person with the thermos. It’s perfectly acceptable to make that sucking sound that used to annoy your parents so much when you drank through a straw – in fact it’s expected: how else can you tell that there’s no more water left in the cup?

The cup is filled with yerba mate

When I first tried mate, I thought I was just supposed to take a sip then pass it on to the next person, like with Fijian kava or when sharing a beer. But no, it’s important to drink all the liquid until you hear the sucking sound, then pass the cup back to the coordinator to refill it for the next person. And definitely don’t say “gracias” although it’s probably second nature to say thanks as you return the cup, as this means you don’t want any more. Just smile.

The first time I drank mate, in Uruguay, I made this mistake. Or at least I must have; I felt a bit offended that my hosts stopped offering me the mate cup, but continued drinking themselves. Only later I realised that I probably said “gracias” and they would have thought I’d had enough. Now, after a bit of practice, I can say nothing at all with the best of them.

Mate traditions vary according to region and personal preference. Some people add sugar, some drink it with cold water instead of hot. In Paraguay it’s not unusual to use juice instead of water. But one thing that is shared by all mate-drinkers is the social aspect. Yes, mate can be drunk alone, and often is if there’s no-one around to share it. But if there is, it’s a way to relax, chat, catch up with your friends at the end of the day, generally hang out together. For this reason, many offices don’t allow their workers to matear (“do mate”), as this would have a serious negative impact on productivity.

You can drink as noisily as you wish!

I really enjoyed seeing people wander around with their thermos flasks tucked under one arm, or sitting around on the beach or on park benches sharing a mate with friends or family. I also enjoyed how the tradition has generated new products and services: the need for hot water has led to the installation of hot water dispensers in almost all petrol stations, for example — you get a bit more than thermos-full for one peso. Similarly, as well as being able to boil water and switch off, electric kettles also have a mate setting, which maintains the water at the correct temperature for adding to your mate cup.

Drinking mate in Argentina is a great way to immerse yourself in the culture of the country; not only are you experiencing a local tradition, you’re probably doing it with locals. So prepare yourself for the bitter taste, forget what your mum said about sucking through straws and saying thank you, and give mate a go.