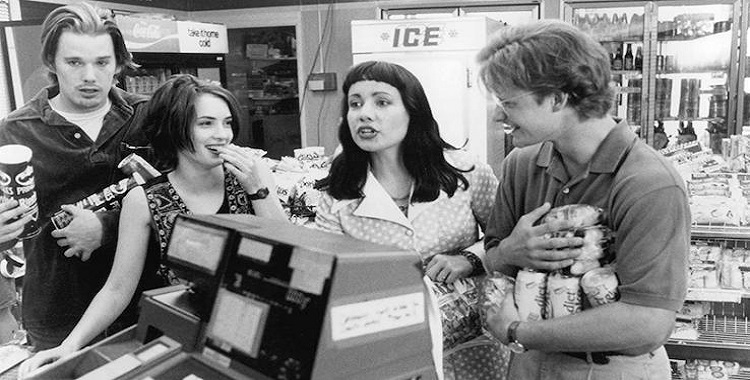 It is interesting the individual take on any particular situation.  Last week  marked the very sad passing of Patrick Swayze and the news is obsessed with his roles in Ghost and Dirty Dancing.  Yet, I personally believe that his most major role is that of Bodhi in Point Break.  As an eternal traveller I think that Point Break has defined a whole generation.

The thought of surfing the world is romantic – you can’t tell me that you don’t dream about that thousand year storm whether it is surf or snow – even if you don’t surf …. the idea just appeals.  Coupled with that belief in every young kid that they can rip off the system – like robbing those capitalist pigs the bank to live the dream.

Patrick as Bodhi in the cult moview Point Break

Point Break sets the scene for a generation – a defining moment for me in which I knew I wanted to be both rich and experience that natural high that only surfing, skiing, bungy jumping and sky diving could ever achieve.  It is the point when an adrenaline junkie realises that no 9 to 5 job will ever suffice.

Generation X has been labelled as being leaderless – a lost generation with no great idols to aspire to.  That is a myth.  Generation X is a generation that challenges everything that we had previously held as a social belief – we are about experiencing things for ourselves, not following others, not being led off to a mindless war, but rather making our own decisions.  Point Break epitomises this Generation X feeling. We were never the hero-less generation – quite the opposite – the likes of Patrick Swayze and dear I say it Keanu Reeves defined a generation of drifters and vagabonds that just want to define ourselves as opposed to being shoe horned into expectations.  We just wanna beat the system not be the system.

We just wanna be ourselves.  We want to travel the world and experience things as they are.  We don’t want to conform to our parents expectations as they were shaped from growing up in the “bad” sixties and seventies.

And then there is is the scene is which tyler is lying on the black silk sheets face down – her muscles rippling in the morning light.  Every Generation X boy fantasises about that back; about being a surfer; about having the ultimate fit chick, about ripping off the system and making a fortune to live the dream.

Patrick Swayze has died and that is dreadful – but for Generation X he will live on in a cult movie that has shaped years of my miss-spent life and I hope continues forever.  I ski 4 days a week in the winter for many of the reasons that Bodhi espoused.  Point Break epitomises a whole generation of adventure seekers and adrenaline junkies during a lawless time of travel when boundaries were being pushed and new frontiers explored, when the likes of AJ Hackett Bungy and Kiwi Experience were just being born as tourist icons, the ground breaking generation that established what today is taken for granted as “backpackers”, professional nomads, and travelling families.

Compare this to the Gen Y’ers who want to cheat the system – do as little work as possible, think they are owed something – you don’t get it, it’s not about the destination it’s about the journey – to experience the green room you first have to catch the wave.  There is no free lunch in life.

Well done Mr Swayze for Ghost and Dirty Dancing – they were great movies, but as an eternal traveller Point Break fucked me – and for that I am forever eternally greatfull.